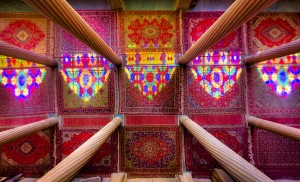 Nasir Al-Mulk Mosque is located in the city of Shiraz, and was built in Qajar era by Nasir Al-Mulk. This mosque has two eastern and western bedchambers, and the eastern one has a tiled altar accompanied with 12 columns and windows with colorful glasses.
In fall and winter seasons when sunlight shines through the colorful glasses, it presents as exemplary beauty to the interior of the bedchamber, making this mosque outstandingly aesthetical among other mosques of Iran. The tiling and paintings of the bedchambers are of exceptional beauty as well.

I have seen Stained glass work in many architectural buildings, however the stained glass in The Nasir ol Mulk Mosque is Exceptional.
From the start of dawn the mosque is filled with colour and light. Sun shines through the glass and fills the inside, the persian rugs, the ceiling and wall tiles with patterns and colours.
I am so amazed at how the architect was able to combine so many things to build such an exquisite mosque.
I went to this mosque on a winter morning, and waited for the light that moves gently from the right hand side of the mosque towards the left, to fall exactly in the centre so that my photograph could be completely symmetrical.